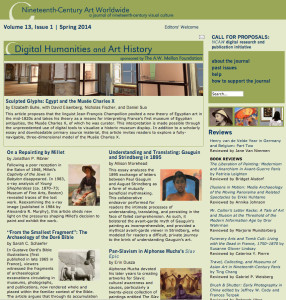 From 2001 to 2015, I worked on one of the field’s first online scholarly journals, Nineteenth-Century Art Worldwide, published by Association of Historians of Nineteenth-Century Art (AHNCA). Over the following twelve years, I produced twenty-six issues of NCAW for AHNCA, as the landscape of what became known as “digital humanities” shifted markedly. For example, what began as a website made up of static HTML pages was transformed in 2009 into a dynamic website built in the content management system Joomla.

In 2011, I worked with the Managing Editor of NCAW, Petra ten-Doesschate Chu, to secure a grant from the Mellon Foundation in support of a digital publishing and research initiative. Our primary objective in applying for this grant was to maximize the potential of our online publication format.

For the first four articles in the series, titled “Digital Humanities and Art History,” I served as project manager and publication developer.* I guided authors from conceptualization to the production of their scholarship and advised them as they consider various digital tools in search of those that best correspond to the particular research questions they are investigating. I also helped them consider questions of methodology related to emerging fields such as social network analysis, geographic information systems, and 3D imaging. Together with these scholars and technical specialists, I confronted issues related to using programs such as Gephi or ArcGIS as research tools and presenting the results of this research in an online publishing environment.

Under the capable leadership of journal editors and founders Chu and Gabriel P. Weisberg, NCAW continues to innovate in the field of digital art historical scholarship, maintaining its excellent reputation in the field of nineteenth-century art history.

* Elizabeth Buhe took over as project manager and Allan McLeod as publication developer for the last two DHAH articles.